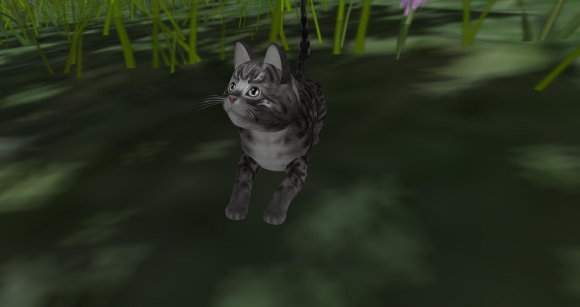 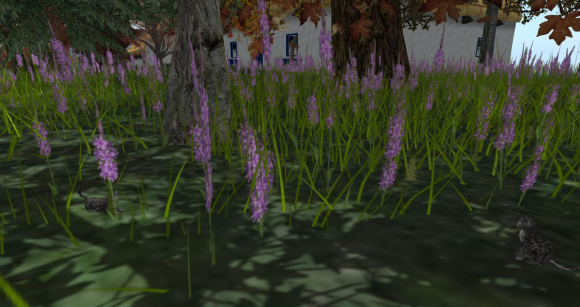 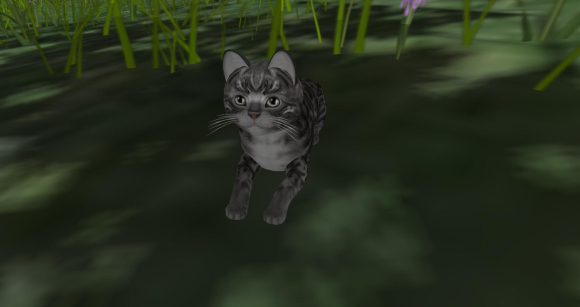 What a better place Honister is now that it is out of Brian's hands, even tho he had "special powers

Blessedly, a nice build on that big parcel in Honister that went for sale but it may not last as the

owner had wanted to sell, so worth IM'ing him 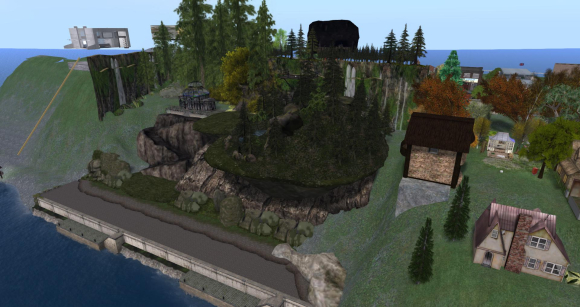 You CAN partner a MegaPuss with a TeaCup -- It's All Fine

You just have to make sure the Mega doesn't crush the Teacup to death. But cats are pretty nimble. 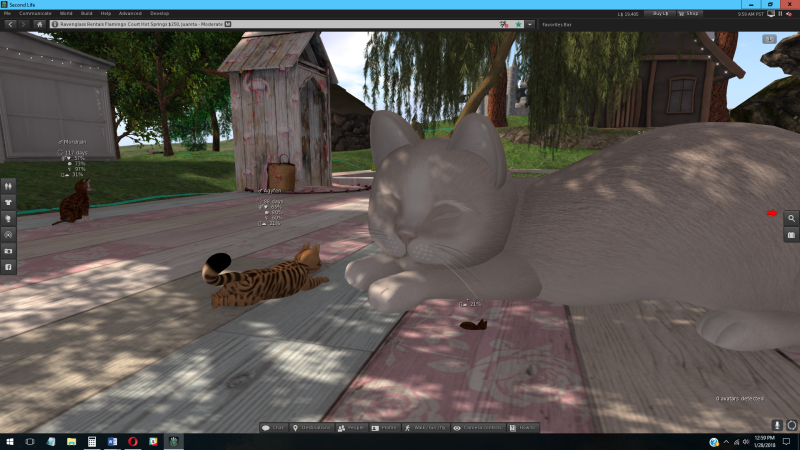 The Mega's previous partner is trying to pretend this is some kind of "issue" but he's just jealous, this is all fake. The Teacup can usually haul himself up via the wiskers. It's all good. 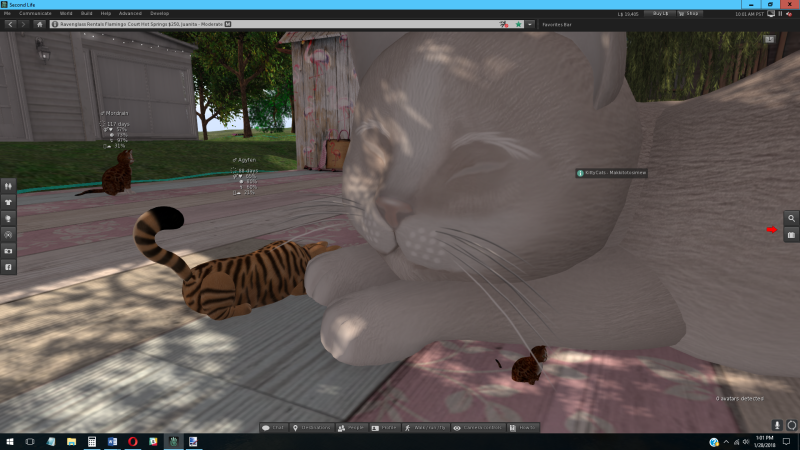 When they first created this sim 12 years ago, they should have made all
the water Linden land. If that seems like "too much," let me suggest that
the abandonment they get at these locations due to people hijacking inland
water is way too much, and way too much more.

Note we also have a "water sale" here. I was offered first dibs to buy it,
but I don't have 14,000 tier and I refuse to buy the view. I thought of
trying to convince the owner to chop it up and only take the most emergency
border but then I said, no, I don't want to spend money and tier on a pond
that might be crapped up arbitrarily by a buyer over there on the other
side. 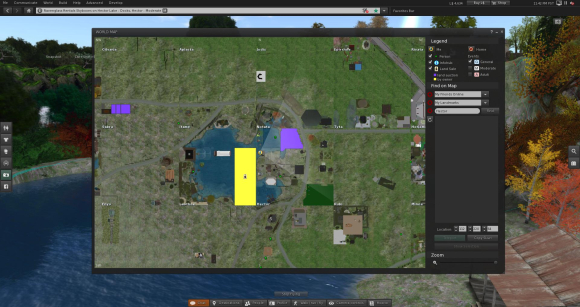 So the Lindens, who read that, and are nasty, and like to stick it to me put this on auction -- then

likely seeing that land go purple, two tenants on the waterfront fled.
Maybe they fled for other reasons, but they had been there on and off for
awhile.

This water which I was forced to buy from Mr. Kawaii Mall last year "to
save the view" is only half rented, i.e. I put up 4 skyboxes and they never
seem to rent. I've discovered that trying to put skyboxes over water as a
solution to having to buy water seldom works fully. Doesn't seem to be a
good reason for this. 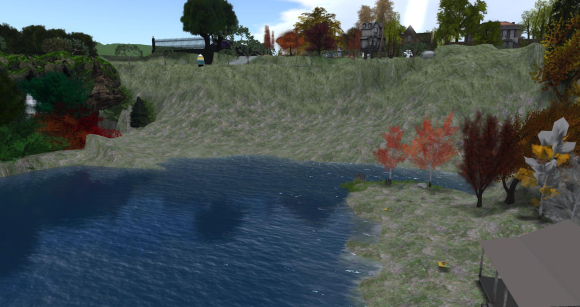 So, the Lindens read my forums comments under Mainland about Abandoned land -- here's a perfect ex

It's waterfront, it's prime (disregard the lumpy terraforming, that's
fixable), it's on a nice lake, it has sat here easily more than a year.
This is the land that the Kawaii Mall owner, now MIA, planned to get the
Lindens to put on the auction last year, and which he'd guarantee himself
to win by putting up the ugly mall in front of it so no one else would be
tempted.

UPDATE: For those of you who complain that I'm seeing malice behind what is in fact good will, you don't know your Lindens like I do after 13 years living amongst them. Perhaps one might speculate that some well-meaning Linden who read my forums post said, oh, let's get some more of that waterfront abandoned land we've left sitting for years on the auction, Prokofy has a point!

But for them to put THIS waterfront that they have left for years and know about perfectly well (as they have run auctions on this little pond for other parcels in the last few years, some with disastrous results) does mean that YES, they are sticking it to me. There isn't a neighbour who wants to buy it -- I know all my neighbours and we cooperate constantly. There MIGHT be some land flipper who just chanced to see it and asked the Lindens to put it to auction. There might even be forums harassers who decided to harass me in this fashion even though they have no intention of buying this land -- that is VERY likely as always in anonymous and vindictive SL.

Still, my very long experience in these matters lets me know that the Lindens went and set this land knowing they could a) look good like they were "doing something" b) stick it to me c) for ever more, be able, like Eddie Haskell, to say they didn't mean anything bad by it and I'm the problem.

They know full well that a) I don't have the tier for this land and won't buy it b) I haven't bought anything on their auction for probably a year, because it's a fool's errand

They do know that because there isn't THAT many transactions on the Mainland such that they are overwhelmed with customers who buy their land. Please.

Anyone who loses 15,000 items in an ridiculous inventory loss due to bugs, not my error, and who has experienced all kinds of other strange harassment, indulgence of griefing by them, strange one-day bans for mysterious reasons, etc. is simply not likely to buy land from them. And it's not about me. Others who have experienced inventory loss, griefing, view destruction problems (de-rendering does not solve these, please) etc. tend to not want to buy land from the Lindens. They need to fix all these things not just fix quick technical solutions or harass people like me who actually pay them tier. 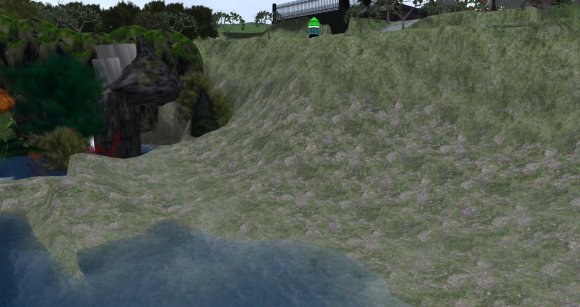 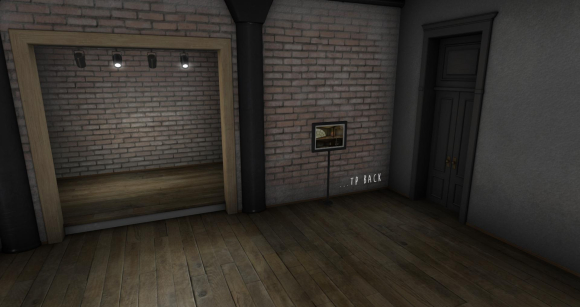 Next
Tweets by Prokofy