So I'm going to try to blog the other contestants in the Home & Garden Expo Decoration Contest, but at the rate I'm going, the contest will be over. It ends June 1. Come and vote for me at House No. 4!

This is an entry by MJ Zaurak in the Granelda house made by Sandi Gras. It's kind of an adobe hacienda type house, and I seriously contemplated having this be my house to decorate since I have so much Mexican stuff, but that's just it -- it's all taken up in rentals at Hacienda Casita in Polia, and I was afraid if I raided all those, especially the single-copy things, the rentals would be left barren. I also just had an idee fix about Frank Lloyd Wright (which I actually didn't even implement) and took the Buccaneer house.

So MJ has a sculpture out in front by Lucas Lameth (luc) The Dancers Sculpture, Copper-- I don't ever recall seeing it and I thought I had all his stuff. That's what we're in this contest for, to shamelessly grab shopping and design ideas. Hold that thought, we will return to it. I don't care for the fireplace in this house -- like I didn't in the Buccaneer -- although I must say that most people expect fireplaces to be in houses. I'm so used to putting out my own in rooms and skyboxes that I forget this.

So I think this arrangement does well both to mute and echo the roundness of the fireplace (which is what I find irritating about it). The colours are very Tex-Mex and the rug is perfect with them. 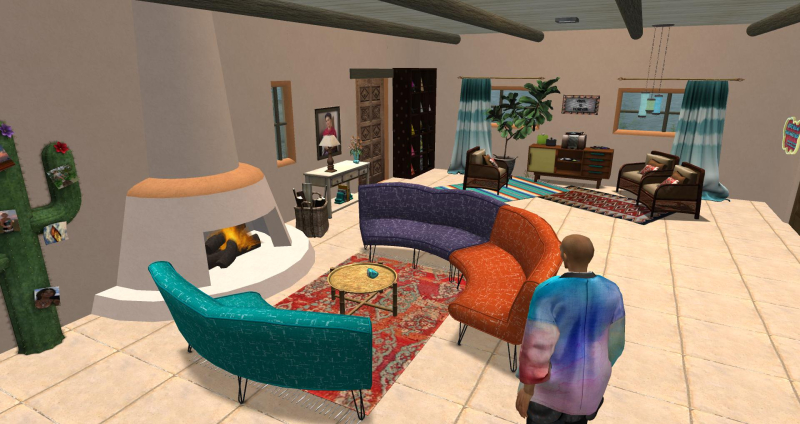 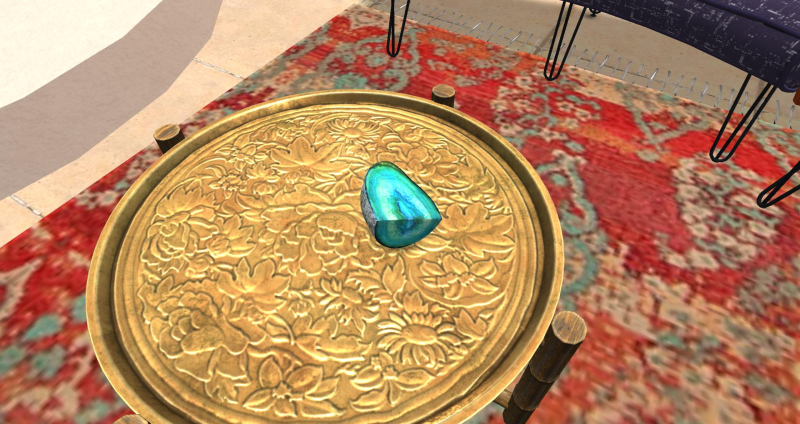 So now see what this chair arrangement has been coupled with -- Bloop- Suzen JueL. I love using original art, and this is raucous and that's what we're here to be in SL. The reality is, it does echo the chair colours. But it's just a tad "off" for me. I might try to find something else. But there may be nothing else that fits as well. And remember, like hot Mexican food, you need to hurt the eyeballs a little, it's good for the Doors of Perception. 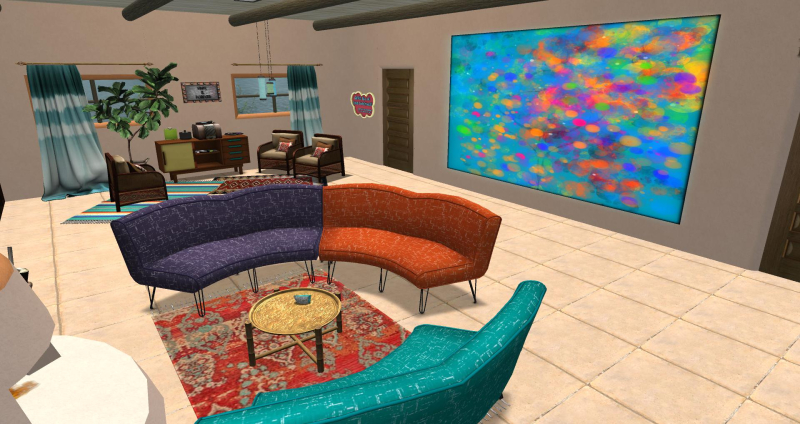 But relief is not far away with this minty arrangement that is very soothing -- repeating three chairs unabashedly with a muted brown, and the curtains and of course Plato's platinum lamps which I also use, at the hacienda, and not to be "retro" but to put those colours in the scene.  "Vinyl is Forever" which actually sells for a fair price at gatcha yards adds the feeling of eternity. That brown chair is Zinnias Casa de Verano Armchair and I'm thinking: how can there be a Zinnias chair I don't know? I thought I bought everything in the store. And that's just it. You can never buy everything in the store and there is always something more. {vespertine} record showcaseshelf is also a a solid piece and lends authenticity to the scene. 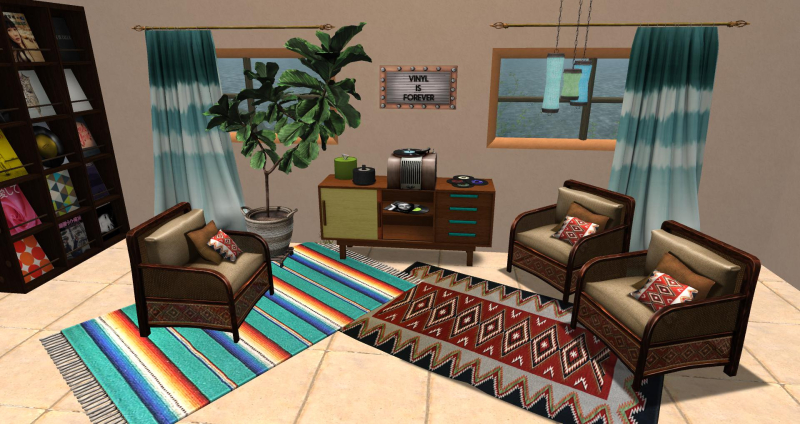 Moving to the next room....This is the kids' bedroom? Is that Susan JueL piece with the boobs appropriate for young children?! But they may be teenagers and trying to piss off Mom. These ionic bunkbeds don't work for me here. I've found it is impossible to put anything with those ionic pieces except other ionic pieces -- I have them in rooms at the Grote Camp. They're like TOO rustic. And the issue maybe that there are just no other bunkbeds for a house like this. There are a lot of 1970s type or suburban type bunk beds but they don't fit. Actually I can think of one gatcha bunkbed that would fit.

See, if you have LAQ Decor you have upgraded the room considerably -- if this were the Sims Online, the room points would have been upped, and then not a dead plant but those bunk beds would drag them down. LAQ's desk is wonderful. And I think here it is recoloured to very good end, perfect colour (the original is shabby vintage white I think and that's too-too). 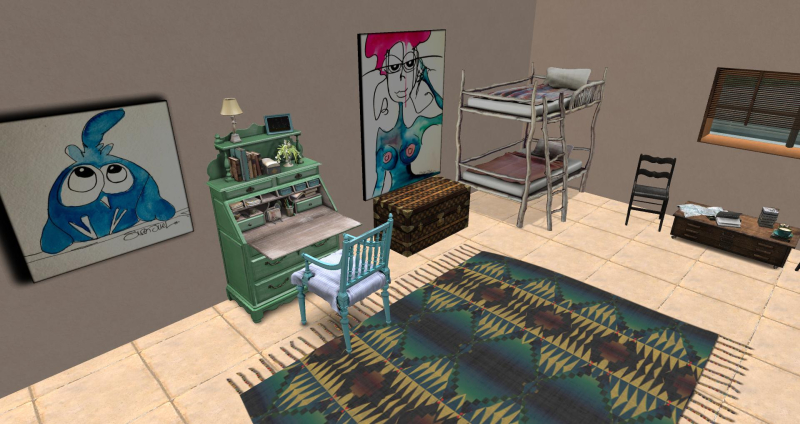 To be sure, I have to say, the JueL piece matches the LAQ Decor ~ Secretary Desk, and maybe it could grow on me, but.... 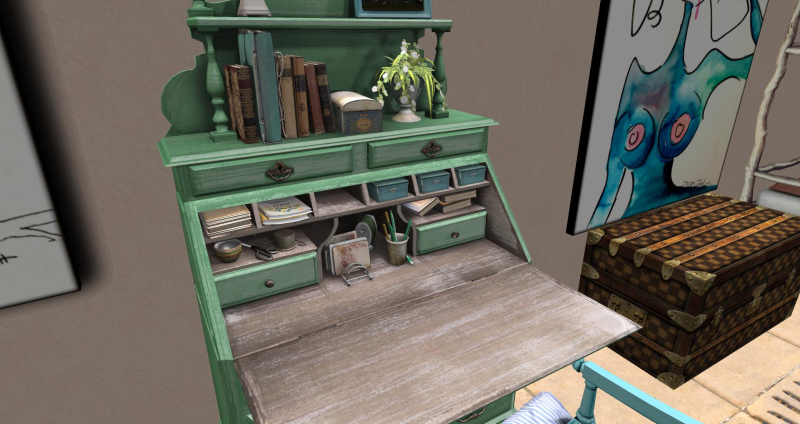 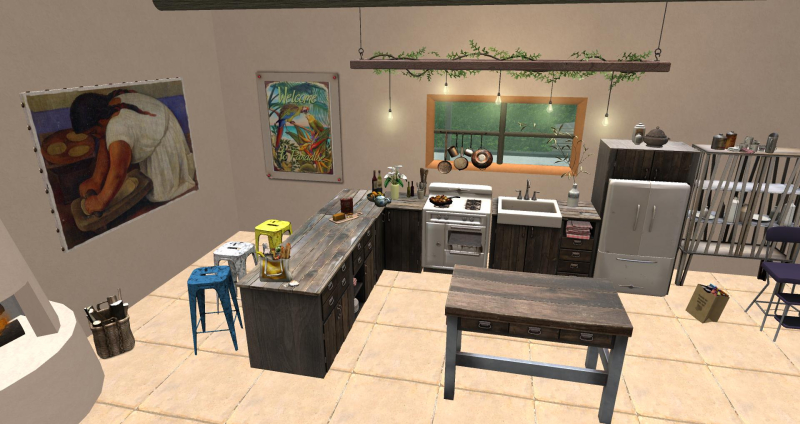 I like this corner, the colours in the urban scene replay on the stripes on the table cloth and then the rug. Your mother told you never to mix a print with a plaid or different prints, but this is SL and there are no Mothers. I don't care for the plates. I generally avoid wall plates. But then, they balance out the scene and that's a plus. 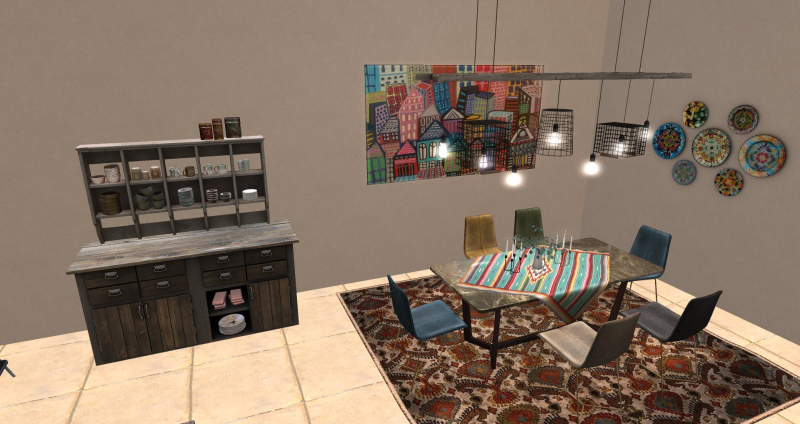 Look at the woods on those tables. 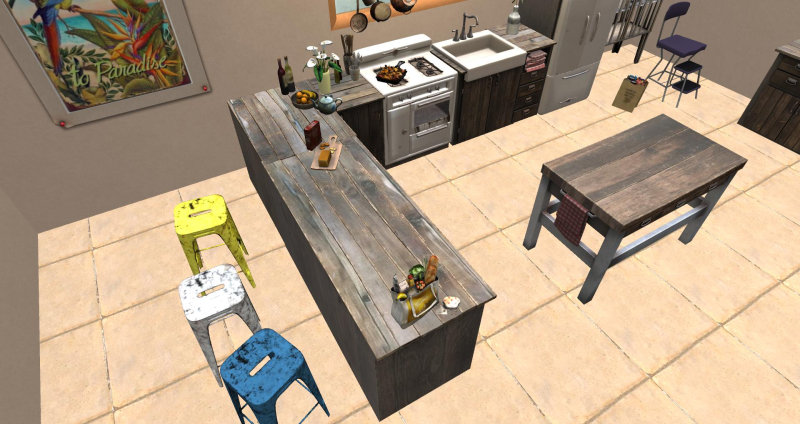 This is a very lived-in realistic RL type corner. The purple coat ensures that. And it's my old friend the one-prim hall furniture! And this time on mod! What?! So since this piece says "from PrimZ Etc 2013" then I guess the piece began life as a builder's full perm and got repurposed. 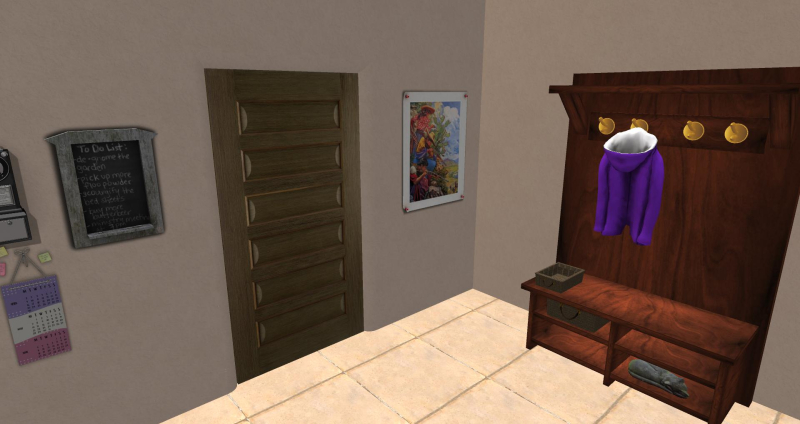 Zinnias Vintage Poster-Revolutionaries -- again, I don't know how I missed this find from Zinnia's! It isn't politically correct due to the guns, and if they're communists, they aren't PC for me, either. But it's a great piece, and this is SL. 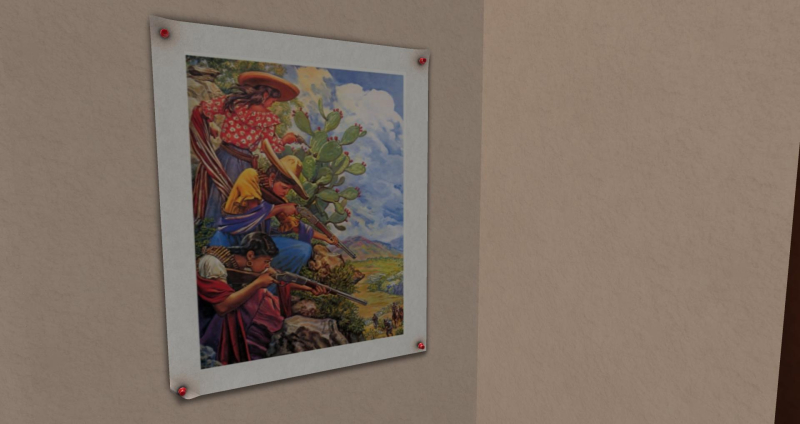 It's hard to do gazebos well as they are so overdone in SL and this is pretty good. The first thing is to avoid candles in cages and sticks in vases -- and MJ has also avoided the temptation of propping a guitar in the corner. So plus plus plus.

Then it's pretty spare and nice -- I see my old friend *:..Silvery K..:*Garden party(KiwiDrink server)9 which I have out in the Flamingo Motel Annex in Grote -- the colours are perfect for this house and scene.  That's actually DRD Gardenhouse Terrace chair although Zinnias has a very similar wicker chair. Notice that Annabelle's thing which I bought because I thought it was a giant carrot (it's a palm tree) is also perfect for this rustic scene. 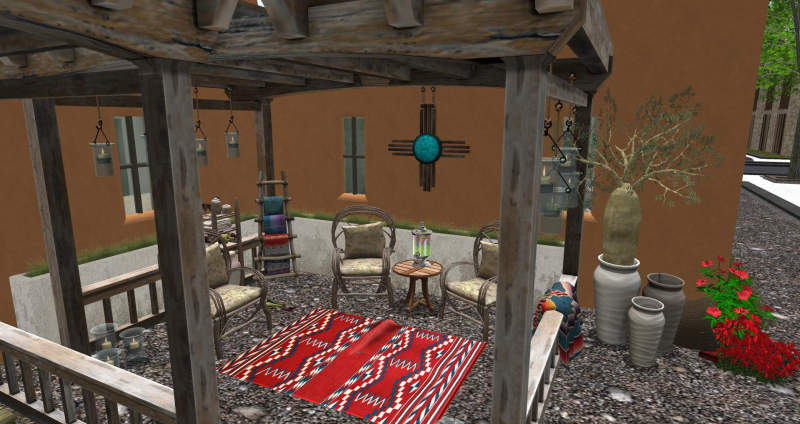 Then this tile to die for -- again from Zinnias. I checked in inventory and I actually had it. So it takes an event like this to shame you into realizing you have too many things you have forgotten in inventory! Zinnias Cascada Wall Fountain -- and I must put it out at Hacienda Cascada of course. 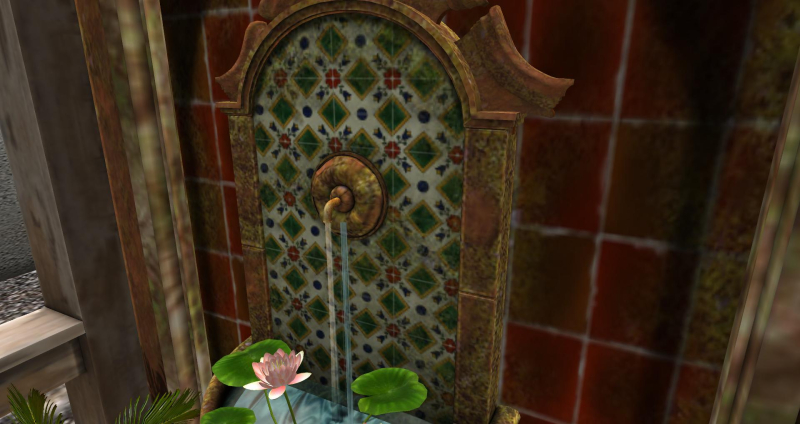 Look at the whole effect -- I like it.  That's actually not part of the house -- it's Zinnias Santa Fe Arbor. Again, I miss a lot from Zinnia apparently! 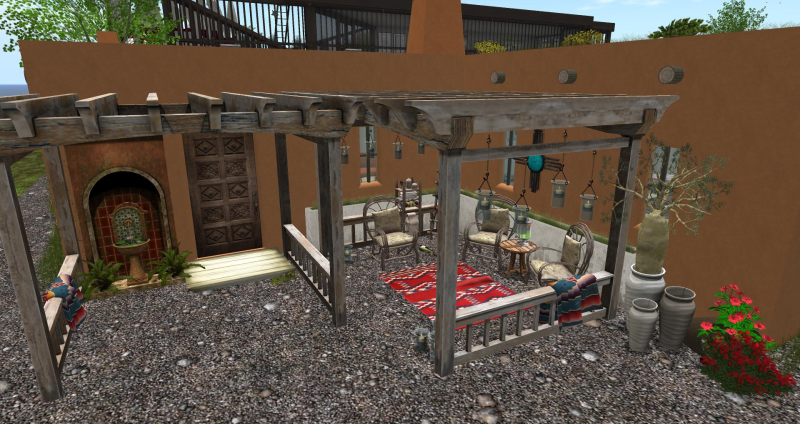 So let's go back to the bedrooms, and on the way remind ourselves that (NO) CATctus - Prickly Pear RARE is one of the more perfect gatcha items in SL, but it will cost you $400-500 on the MP. 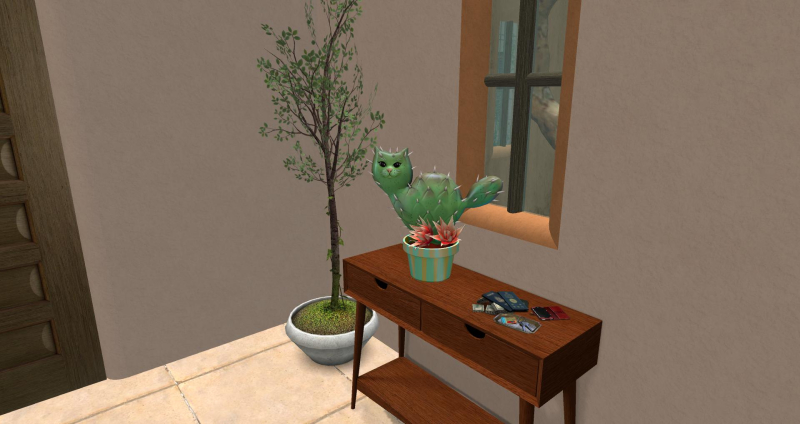 So, no, these bunk beds didn't get any better for me because now I ask the sort of logistical questions I do for my own houses. Why did Big Sis get this big bed and this whole corner AND a room divider AND a planter (ionic) but the little sisters -- or the other foster children? or? -- got these bunk beds and no room to put their stuff! I worry about the family dynamics here. Or, as one visitor suggested, maybe this is a half-way house for addicts out in the desert where they can't escape. We should look for copies of the Big Book. Meanwhile, Big Sis has a really nice set up. It's very crowded just like the reality of a big family and cluttery and realistic. -tb- Bon Voyage - Suitcase Clutter RARE at the center here. That lovely emerald bed is called *bbqq*-Crawl Into Bed[PG] 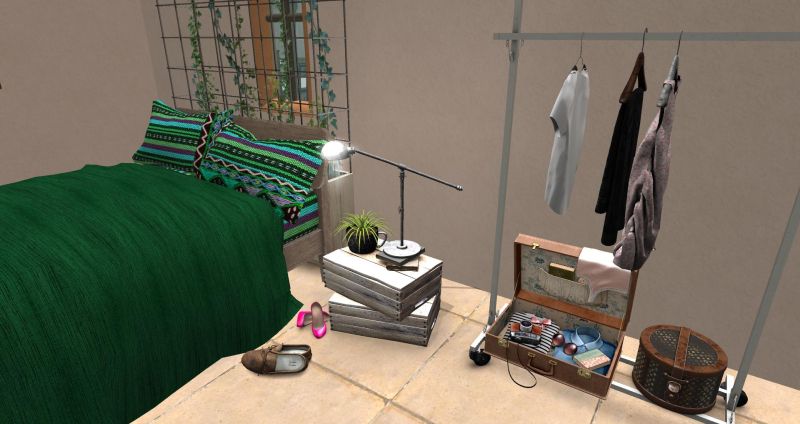 This is in the bedroom, and lets you know that this family once had a more elegant life (before all those kids) and had Apple Fall pieces they either inherited or got at estate sales -- but then again, if you have Apple Fall, why ionic bunk beds? The parents' room doesn't suffer from such great contradictions although you still see elegance and hippiedom straining against each other. Now see that little sculpture? It's a small version of what is in the front yard. I love things like that. So ARIA - Solace Flowers -- very beautiful. Zinnias Huichol Tree of Life Tapestry -- surely I knew such a thing existed. %Fritz Chair *MESH* 02 RARE! - COPY is the one item that really doesn't work for me, but on the other hand, the flesh tone may be intended to mute the other brash colours. %Cloine Chaise MESH is perfect for this house and this scene. 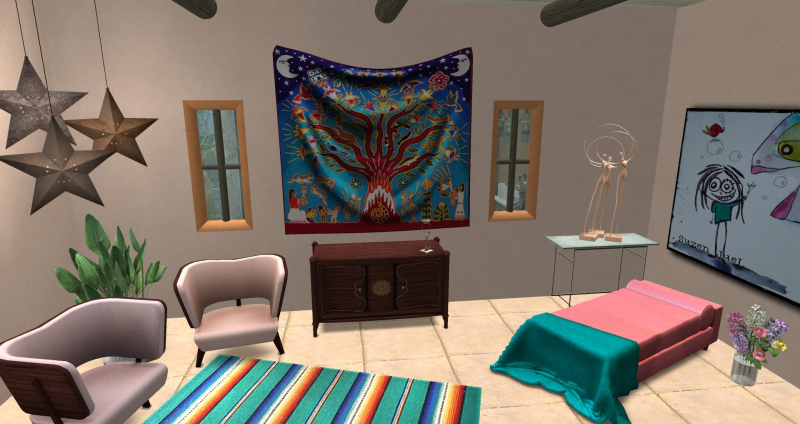 Here is where you learn that JueL can do things other than stick figures and boobs (emanate - Suzen JueL Resistance) -- and that's a good thing. I'd buy that sort of piece. This is great with the FC- Full Perm Mesh Flowers Succulents frame. Is that Fantasy China? I didn't know they could make anything other than blobby omelettes and Spanish stew that looks like garbage. Well, good then! And yet another missed Zinnia - Zinnias "Verano" Draped Ceiling Decor red stripe. I haven't been the student of Zinnia that I thought I was.  ROIRO - Hana sofa (RFL) doesn't work for me. Usually most ROIRO things are absolute treasures and sell for young fortunes but again, this flesh colour...but again, it may have had a purpose.  5_{-Maru Kado-} My Hideout_Rug (red/3Li) is perfect here. 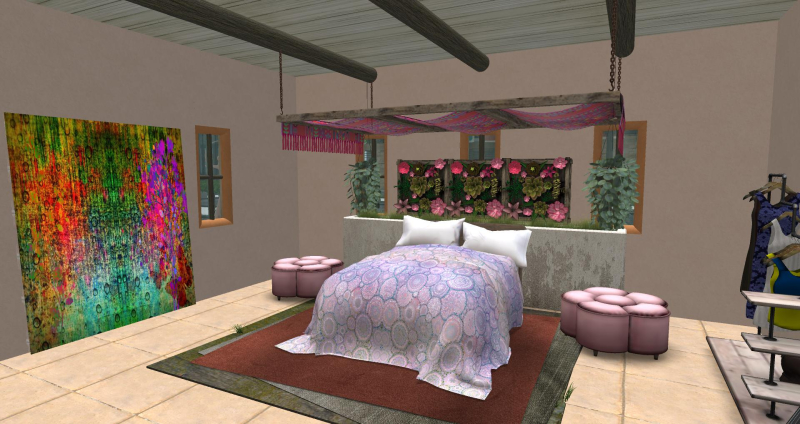 On the roof was [Cb] Solar Panel Array - now why don't I think of things like that?