So back to take a peek at my competitor -- and she had a great idea, putting that step chest at an angle to solve that corner. Why didn't I think of that. I never think of things like that. Nice pots, too. 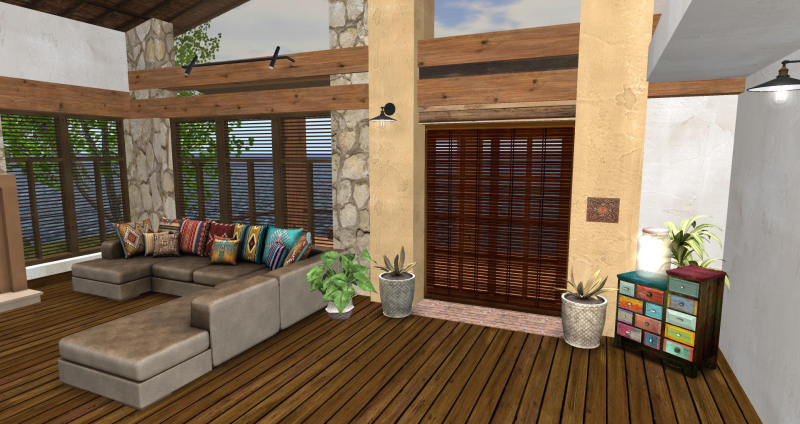 So here's Ria Bazar's Arizona kitchen -- that's all of it, except for the Apple Fall piece on the right. Simple, elegant, normal. Surely she has prims for food now, but this area is done. 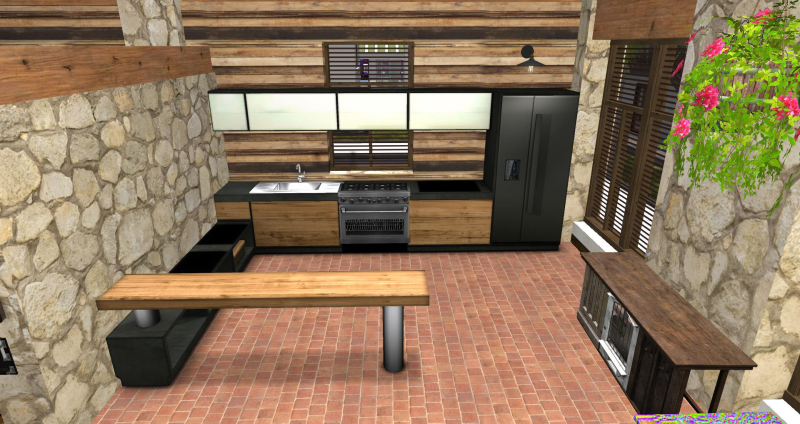 I'm still angsted about using this area as the bedroom, but I actually don't want to swap with the study -- which in my conception, is my only choice unless I take my "food prep area" (as you will see) and swap that out for the study, put the bedroom in the study, and the kitchen in the kitchen. But you know, unless in the next few days before the deadline I get second thoughts, I will leave it because I like it myself.

So let me show you what I did with the bedroom/living room. I think it still needs editing for parallel construction. Maybe it needs rugs. I'm out of prims so it means choices. 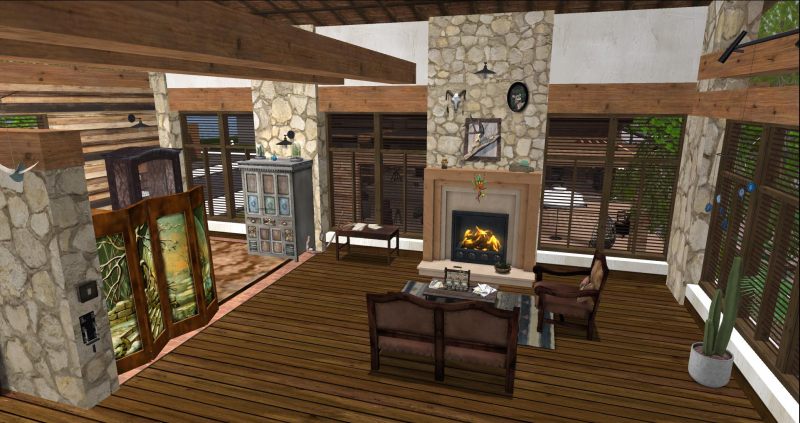 So basically, I had to use this built-in fireplace. That changed my mind from my original conception of art deco/Frank Lloyd Wright if there were no fireplace, as I had one I wanted to use with this house (which is now in the rec room).

So the fireplace props are more aesthetic. No actually dead deer heads with fur and taxidermy. This is a bleached skull by THOR, a beach glass and driftwood peace by Lucas Lameth, a little jar (~RB~ Red Deer Terrarium) by Raikeira Belfire , and then this funny full perms shaman thing by Loren Zefeiri which like all such things, you can only use in your own builds with no-copy, and sell for more than $50. I actually made a complicated sculpture with that shaman, but it has "issues" so in the mean time, it's just going as decor here. 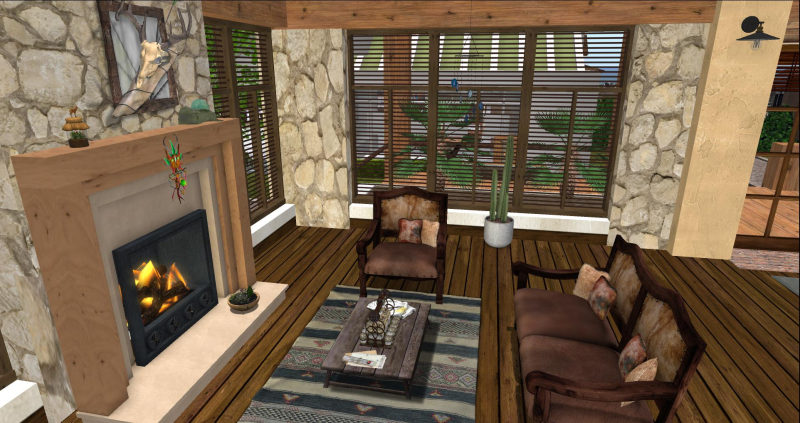 The cactus bowl is from THOR, and the rug is bigged up and greyed, also from his Mohave set; the coffee table is his too but I think from another set. Then I put Artisan Fantasy hacienda chairs which I have on my actual Hacienda in Polia. The colour isn't exactly what I wanted and it has politically-incorrect fur and hide but I don't care ultimately, this is the Buccaneer house, remember? There's a grander sofa of his but I think it's not on copy, or least I didn't have it in inventory and it's out at the Hacienda, a dignified, big green piece, maybe I'll put it here, but the cuddle couch seemed like a good solution.

Because while this is supposed to be the "main" space, I'm thinking of it as "the recesses of the house" where the writer retreats from the external "public" spaces of rec room/food prep room with its "hidden" study which is after all associated with work, even with work at home, and the path to upstairs for the barbecue "kitchen". So this is the "living room," if you will but actually more private. He doesn't have company in here.

As you know, company always gravitates to your kitchen so he put the kitchen/food prep/rec room in the other, smaller room. This room, however, has the cuddle couch for those private moments with the girlfriend.

I definitely wanted a Kittycats' drink set, but which one? First, I put out Southern Comfort, which is a nice tray with green drinks, maybe mint juleps, and snacks. After all, "Buccaneer" is the south, right? Ok, wait, let's look this up:

Buccaneers were a kind of privateer or pirate peculiar to the Caribbean Sea during the 17th and 18th centuries. Originally the name applied to the landless hunters of wild boars and cattle in the largely uninhabited areas of Tortuga and Hispaniola.

So, hmm, I have a bit of pirate stuff as you'll see. But this guy, if a buccaneer, is a retired buccaneer now, anyway, living with his memories. Maybe he has a lame leg, a war wound or a hunting accident, there's a cane in the wardrobe.

Often I put a much bigger plant on a fireplace. I don't know why I just wanted to stay with this little succulents bowl. 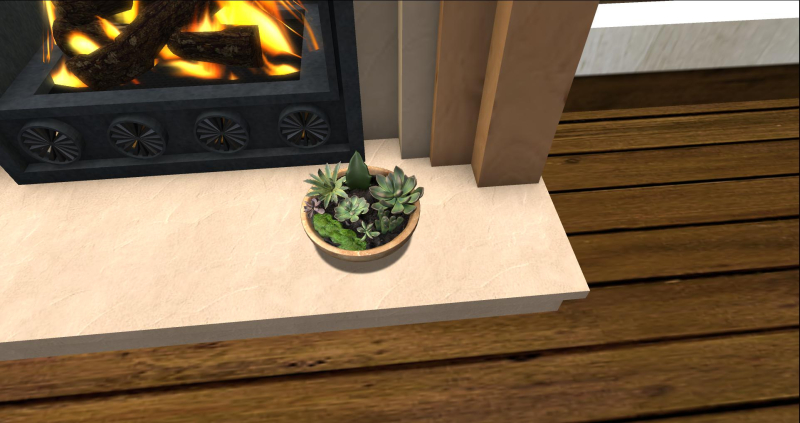 I have a feeling this creator drew this shaman, then decided to cut it out and mesh it up. And that's ok. It's hard to figure how this will "fit into a build." per his TOS. I put it in a sculpture with some other items but the full perms creators sneer at you making any "art" of what you sell from their stuff -- I think some people sell the stand-alone thing as "their art" without any adornment and they hate that, as it is literalism and violates the spirit of their license. I think I have a cool sculpture/interactive idea, but it needs some technical fixes first, then I'll show you. Or what I would do with this guy is shrink him down and have him be one tiny thing in a box of geodes and whatnot that is a "treasure box". What else can you do? 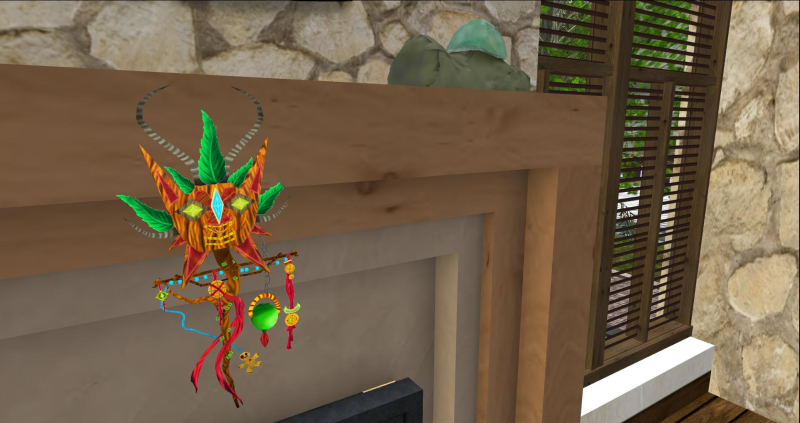 Just another "anti-hunting" note. Well, I feel it is, but actually, I don't know. I love this little cameo from schadenfreude called "Hunter's Kiss" -- part of a little series of animal portraits. "Hunter's kiss" -- well, that's a contradiction in terms as the hunter is going to be killing, not kissing this animal. It almost verges on kitsch but it's very poignant. So let's say even the woman in this house made this set-up. But maybe not. Maybe the only reason this writer goes hunting is that his father and grandfather were hunters and he couldn't wimp out of that family tradition. We don't know. 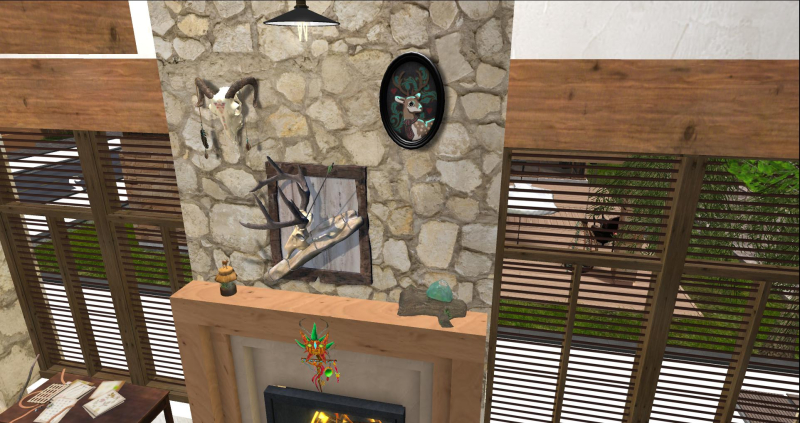 I'm absolutely happy with my decisions to put onion and vidalia rows in the indoor planter. I bet Ms. Varriale never envisioned this use of her beds.  But nothing says "Spanish" and "southwest" like vidalia onions, no? And I have to have the fresh vegetables for the salads. It's cold out and these onion beds actually do very well here. So that's that. The rug here is from a set of rugs of different colours with deer designs. Not that inspired, but it's ok. Rugs bother me. I used to have a wonderful set of rugs, many single-copy Storax rugs, and they were all lost in my 15,000 item inventory loss. So I have this now from LISP, and it's ok, because rugs scare me a little, trying to paw through all of them, 90% of which aren't going to work, is too depressing. I can see judges marking off points for that rug decision which is "mint" with "grey colouring". So maybe I need to go back to the drawing board. 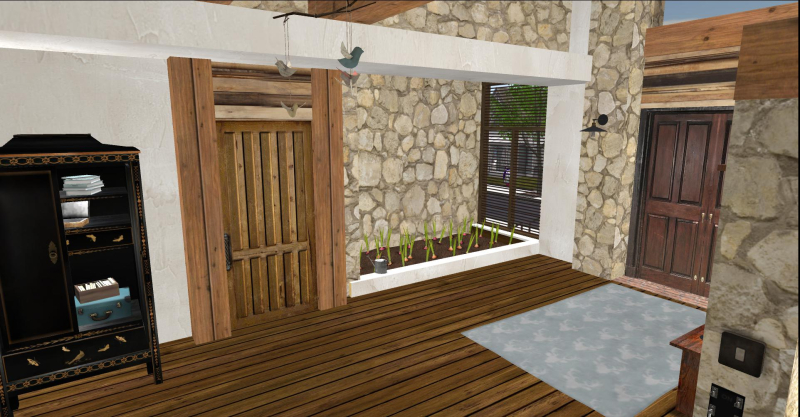 When I stand by this big Chinese hutch by Casa de Bebe, I have qualms about where I'm going with this entry way.  If nothing else, that rug colour has to be fixed. 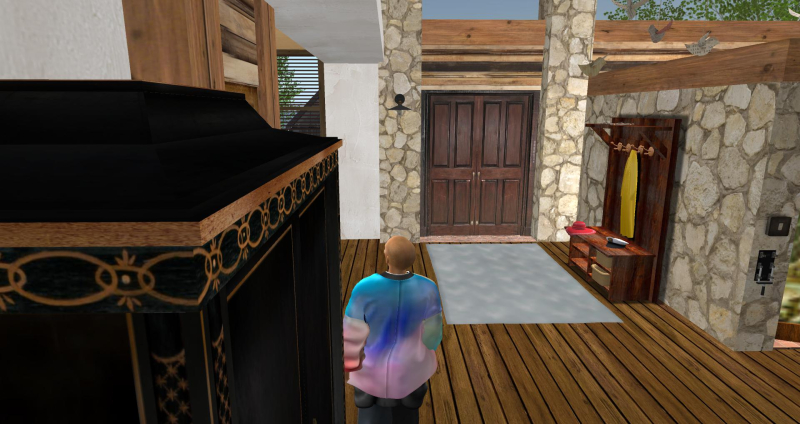 So I dithered over the hall set. I was rummaging through hall sets and though this was good and then it turned the story for me -- it's not on edit, I can't remove the hats, so then there has to be a guy in the Navy with that cap and a woman with that floppy hat, but his raincoat is there and her coat is missing. It's only one prim though. Sculpty, but I think the texture looks good. If it were on edit I'd remove those dumb baskets and put boxes there or something. 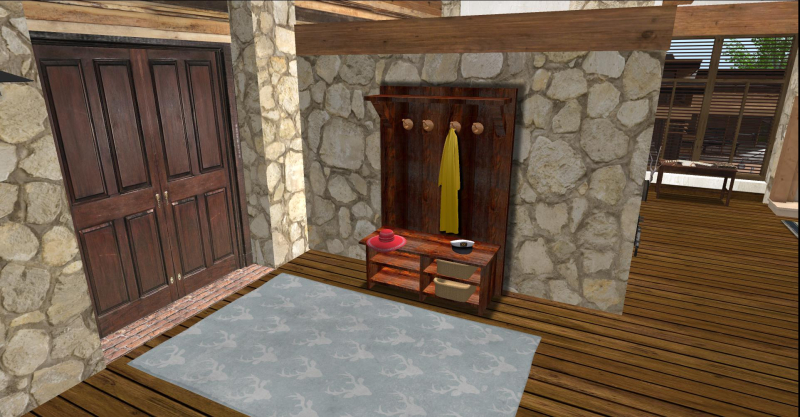 I looked at THOR's hallway in his store and dithered about it. It's good, but it's very white, and colouration with colours can look terrible on furniture. It's also too shabby for the worn but still noble look of this house. This guy comes from money. Maybe some of the furniture is from Mom and Dad's house. Remember this is Camp, not their main house. 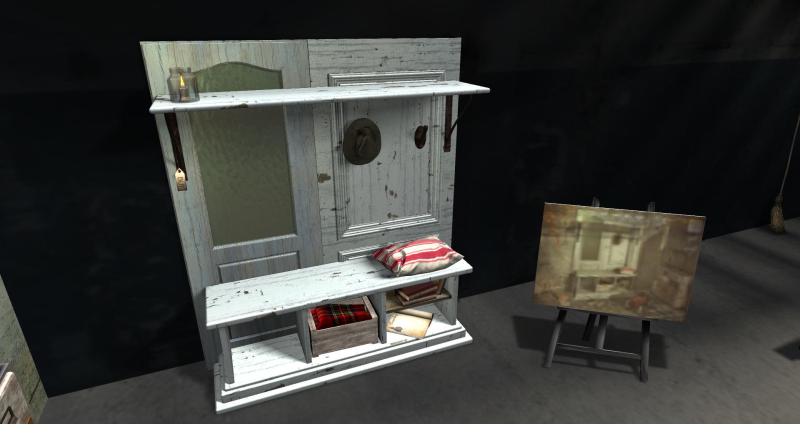 The thing is, what he has there -- a box, books, a pillow -- that's just more what I want in a hall set than those dumb baskets. The hat is also perfect for the 1950s guy. I could even stick in a woman's hat or stole or something. Hmm. I do have a lot of THOR stuff already and this thing will probably be like 10 prims, I need to check it. There's its whiteness. I might be able to retexture it actually...anyway this has to be decided by the 27th. It's another $700 or whatever and I don't want to be spending more on this. I also do NOT like the blogola system in SL where you are paid for blogging in free non-transfer goods. I reject that, although on this bid, I accepted two blogolas completely by accident as I will tell you.

There's also Zinnia's WONDERFUL southwestern hall set but that is too far in the Mexican direction -- we're Upstate New York, remember?  We're at best doing faux Tex-Mex by Northerners who don't know what they're doing, actually when they throw around striped rugs and cactus bowls.

In the next post I'll explain my real hunting corner. 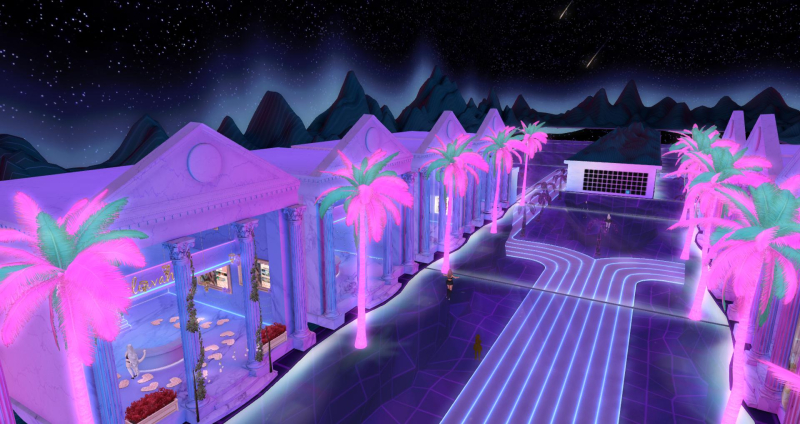 You could complain about cultural appropriation? But it's not clear which culture. Tex Mex? It's 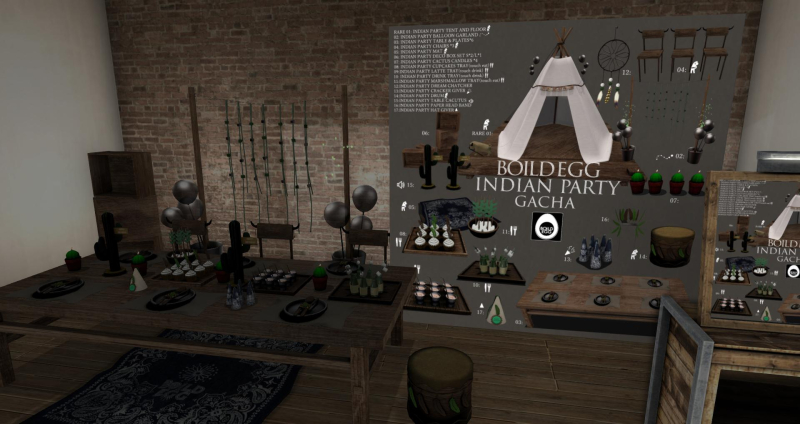